Day 5: Minneapolis, MN. We were staying right by Mall of America and the hotel had a free shuttle, so what else we we gonna do? Besides, I only had one pair of pants, and after my fall at Hogan’s, there was some blood from my knee in them. There’s an amusement park in the middle of the mall, and Sarah had never been on a roller coaster, so we made that happen. SpongeBob’s Rock Bottom Plunge, $6.90 for about a minute of roller coasting… worth it. There were stores for products that I would never have imagined had their own store. Marshmallow Peeps and Friends? That happened. 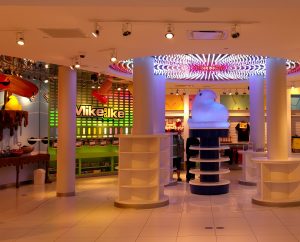 Peeps and Friends, Mall of America

At the recommendation of two unrelated Portland friends, we checked out Bunkers for some live music. Dr. Mambo’s Combo plays every Sunday and Monday. A Portland friend, Trent Baarspul, is great friends with the keyboardist, Kevin Gastonguay. Whoa, they were burning. The sound was great. Good mix and balance, and not crazy loud. Learning more about the spot and its history, it started to make sense why they were so crushing – the usual drummer is Michael Bland, drummer for Prince during the New Power Generation era (there was a (very crushing) sub when we were there). Prince used to come by Bunkers fairly often and sit in. The Combo has been doing it for years and years. It was a little smooth sometimes, but that’s not always a terrible thing. If it gets to the Kenny G level, then yeah, we have a problem – but this was just playing with a lot of polish. The biggest thing for me is when you get into those 80s keyboard patches. So many of them sound terrible to me, especially when a keyboard is trying to be a Fender Rhodes or something. Somehow Prince could make them work, though – I think if you know the sound really well, and know you want that sound because it’s appropriate, then that will make a difference. Plus Prince’s grooves were so funky it barely mattered. 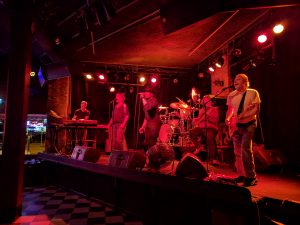 Kevin uses an approach similar to mine, mostly using the staples – Hammond, clavinet, rhodes, piano. He used a few string patches at appropriate times. He plays slightly different gear from me – he runs a Nord Electro 5D through a Leslie 3300, their latest cabinet that’s designed for gigging. I think it’s around 300 Watts, built in a road-ready case with handles, and has a tube or two in the preamp. The drawbars felt nice on the 5D – some people have complained that they’re “sliders disguised as drawbars” but they felt fine. I always thought that a 3300 would be the way to go for my setup, but with it mic’d and put through the mains, it honestly didn’t sound very different from the onboard simulator on the Nords. I couldn’t tell there was a real Leslie until I got onstage and saw it. I think a vintage tube Leslie can have an edge over the newer ones; my mentor Louis Pain plays his Nord C2D through a 40 Watt model 145 and it’s not far off from the real thing at all, especially when you’re onstage next to it. Louis had a 3300 but he blew the treble driver and paid hundreds for a replacement, and he had (I think) never blown a treble driver in all his years of playing on old Leslie cabinets. He sold or traded it before long. Kevin had blown the driver too, but remembered the repair only costing about $100.

Day 6: We drove to Chicago and had the rest of that day off. It’s always wild going into a new city that you’ve never been to, and by car the approach feels more dramatic than by plane. You get a better feel for the scale of the place. We didn’t have a ton of time since we arrived in the evening, but we managed to get some real deep dish pizza – Lou Malnati’s,
at the recommendation of several people. I took it real easy and got as much sleep as I could.

Day 7: Chicago, IL. We woke up midday and looked for stuff to do before the show. I was the last up and got a donut and coffee from the place on the first floor of the hotel, Glazed and Infused, and then walked to get a hot dog at Portillo’s. I met up with Sarah and Jon at the Planetarium, where we had just enough time to see a half hour film at before they closed. It was on the theories about a ninth planet beyond Pluto. We now know Pluto is part of a much larger debris field and not very unique. The whole program started at Neptune and kept moving out – a huge distance that I still don’t think I quite wrapped my head around. They also had an old Gemini capsule in the planetarium – we didn’t have much time for the rest of the exhibits, unfortunately. 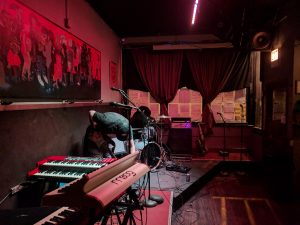 setting up at Tonic Room, Chicago

The gig was at Tonic Room, a spot known by all my Chicago musician friends. I saw the opener warming up – trio of bassist, beat/electronics guy, and MC. The bassist had a sweet pedal setup – I think three Moog pedals, the POG 2, and some other cool stuff. Before leaving for tacos, I said something like, “I’m sure you guys’ll sound great, the bar is set real high in this city.” Turns out they were a joke, and I missed it for the tacos.The MC had never performed publicly before. Everyone said he had nothing prepared and nervously flailed over “beats that weren’t even cool” for an hour. The MC started the set by saying, “I’m gonna let these guys warm up” and sat on stage, messing with his phone. Then he had a few go-to phrases about “I got ideas. I got ideas” and “gonna wake up and read a book.” We have the buyer to thank for all this – he insisted that we go with these clowns, despite having leads from established Chicago musicians. He insisted that they’d bring people out because it was their first show. Nope, that was just as bullshit as it sounded. The promoter/owner was working the bar that night, and apologized several times after the set.
I also got to see an old grade school classmate – I don’t think we’d seen each other since the last day of 5th grade! She’s going to law school in Chicago and is taking the bar in July. Fun to catch up and hear a little more about what people from our class are doing now.
I thought our set went well. It was a shorter one – sometimes those are nice, but it also means we’re going to play a lot of the same material, no extended solos. That’s a good feeling too, though. After a few days off we were all itching to play, and felt inspired by Dr. Mambo’s Combo in Minneapolis to play tight and tasteful. It’s hard to execute some of the ideas on the road onstage, so we’re thinking we’ll try to have a rehearsal at home of just myself, bass, and guitar, and we’ll play to a click. Then we can work out when fills happen and stuff; right now we can accidentally step on each other and play too busy. 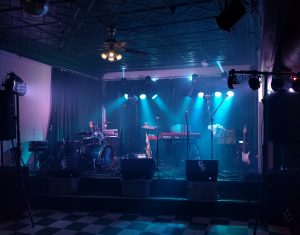 Day 8: Madison, WI. Wow I had no idea how much of a Eugene, OR vibe I’d get from Madison. That place is crunchy as hell. Tons of white people with dreads. The headliner was a band of four white dudes playing reggae with hooks like “your vibe attracts your tribe,” complete with people spinning those lighted yoyo type things. The venue went from a neighborhood bar and pizzeria to a music festival full of smoke in a couple hours. I didn’t realize how thick it was onstage until I saw Chris leaning in front of the light to hear Sarah say something to him – it almost looked like he was exhaling a cigarette. Fortunately it was a short drive, and it only added a few minutes for us to stop by the house used in Home Alone (hey, something to do). I made a point to try Spotted Cow beer, which I guess is only available here in Wisconsin. It wasn’t much to write home about, it’s a decent light beer. We got up this morning (Day 9) and Terry’s buddy took us to a place called The Old Fashioned for a taste of Wisconsin. Fried cheese curds… oh my god. It was that cheesiness you get in cheetos, but it was real. Fried walleye sandwich. Definitely took a van nap. When we got to Green Bay the next night, I realized I’d forgotten my platform keyboard stand, but Terry’s friend Carley was coming to our show the next night in Stevens Point and going through Madison only added like 10 minutes to her trip, so she grabbed it for me. Phew.